We will have a limited number of poster slots, then if you wish to present a poster, please send me your title ASAP (mail :philippe.isope@inci-cnrs.unistra.fr)

“The “little brain” and little brains: The cerebellar contribution to neurodevelopmental disorders”

Abstract:The cerebellum (“little brain”) is considered a neuronal learning machine, and is critical in motor skill acquisition. More recently, it has emerged that the majority of the human cerebellum is interconnected with association cortices, providing the anatomical substrate for a cerebellar contribution beyond the motor realm. Evidence from clinical populations indicates that pediatric cerebellar damage is associated with long-term cognitive and behavioral consequences. Further, cerebellar structural and functional differences have been reported in several neurodevelopmental disorders, including developmental dyslexia, ADHD, and autism spectrum disorders. Specific cerebellar regions are implicated in each of these disorders, suggesting that the developmental impact of cerebellar dysfunction could depend on the regional circuits within the cerebellum that are affected. Our recent work combines human neuroimaging and neuromodulation to understand the specific cerebellar sub regions associated with autism, their function, and the potential mechanism by which cerebellar dysfunction might contribute to autism. These findings will be discussed within the framework of cerebellar functional topography and cerebellar learning mechanisms, with the goal of generating new hypotheses regarding the cerebellar contribution to typical development and developmental disorders.

– France Cerebellum Club was represented at Neurofrance in May 2019 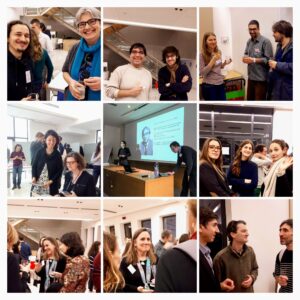